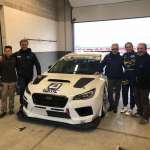 You are reading
Taylor tastes TCR

The 2016 ARC Champion got to sample the Subaru Impreza WRX STi TCR set up at the Cremona Circuit near Milan in Italy this month.

Grazie mille @toprunmotorsport e Frank per questa opportunità! What a weapon. Completely new experience but so much fun. Also very exciting to be back in Italy for a few days. What jetlag!? 💪

While the TCR Subaru and Taylor’s familiar Subaru do Motorsport rally car look similar, there was obviously some noticeable differences on the track for the 30-year-old to come to terms with.

While Taylor is yet to confirm her 2019 plans, could rally and circuit racing be on the cards next year? Only time will tell.

The test comes as TCR Australia officially launched ‘down under’, with the category to race on the Shannons Nationals card in 2019.

A Honda, Audi, Hyundai and Volkswagen were all part of the first ever Australian test day at Sydney Motorsport Park ahead of the category’s racing debut in May.

Six crews in it for Hoosier Challenge honours

SARC to roar through Adelaide Hills