Lewis Bates will make his return to the CAMS Australian Rally Championship (ARC) at the National Capital Rally in his home town of Canberra this week following the devastating fire that destroyed his Toyota Corolla at the Eureka Rally in Ballarat in March.​​

Bates, younger brother of ARC title contender Harry Bates and son of Motor Sport Hall of Fame inductee Neal Bates, will return in an almost identical Toyota Corolla, leased from Peter Taylor for the remainder of the year.

Bates said it didn’t take long to make the decision to get back in the car.

“I took a few days to think about it but I was always keen to get back into it. I’m hoping that is the worst experience we will have and it didn’t really put me off at all,” said Bates.

“Everyone has been an amazing help to get me back out there—Neal Bates Motorsport and Damesa Industries.

“Also Peter Taylor, lending us his son Michael’s car for the rest of the year, was fantastic. It’s a relatively new car; Michael only did two rallies in it. It already had a roll cage and everything so we just had to tidy a few things up and we are ready to go.”

Bates will test the car this Wednesday before round three of the ARC kicks off in the Cotter and Kowan forests on the outskirts of Canberra.

Bates also confirmed Anthony McLaughlin, who competed with him at the Eureka Rally, as his co-driver for the event, despite his official entry naming Dale Moscatt, who suffered injuries in a tarmac rally crash in March.

“Unfortunately Dale is not ready to get back—it is best for him to get 100 per cent better before getting back in the car.”

Recounting the fire that destroyed his Neal Bates Motorsport Toyota Corolla, Bates said it all happened so quickly.

“Everything was going really well in the first stage at Ballarat and I had learnt a lot during recce.

“During the second stage we ran wide but we didn’t damage anything and we spent a minute or two trying to push the car out. It was a hot day and with dry grass something caught fire but we couldn’t pin point exactly where it was and get access to it and it just happened so quickly,” Bates explained.

“It was pretty disappointing, I was devastated that what was a tiny mistake turned into a massive consequence.”

Competing in front of a home crowd can add pressure for many sports people, but Bates said he is excited to compete in front of friends and family in Canberra at an international event.

“A home event is all new to me, there was meant to be an event here last year but it was cancelled due to weather.

“The whole rally community has shown great support after Ballarat; the rallying community is really good like that, so getting out there in front of them will be great.

“Competing alongside international crews will also be very exciting.”

Bates said he was unsure how many national rounds he would compete in this year.

“This year Ballarat was my first ARC round—I just really want to get some experience and improve. Next year I’d love to compete in the full ARC but it depends on sponsorship and funding. I hope to do more ARC rounds this year but we will see how we go and do some state rounds in between.”

The National Capital Rally kicks off on Friday 26 May at 6pm with a ceremonial start at Burbury Close, Barton. Heats one and two will take place on Saturday 27 May and Sunday 28 May respectively. For further information visit www.rally.com.au. 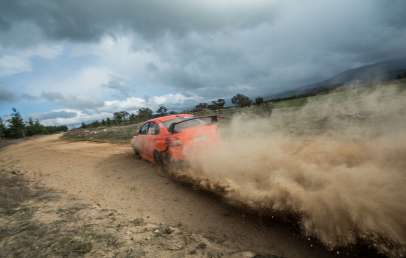