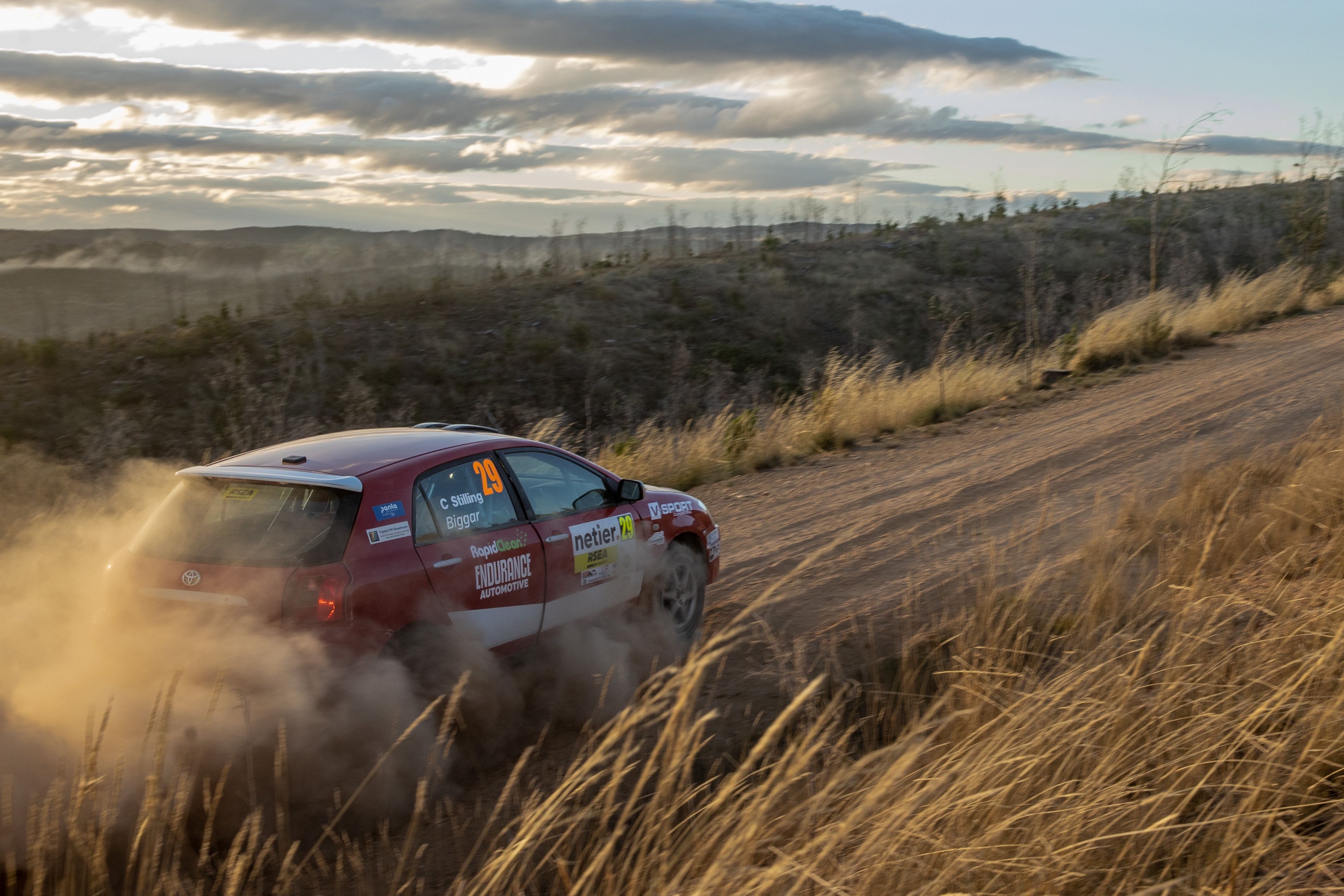 Diary of a co-driver – Canberra

The following excerpt has been written by Queenslander Larisa Biggar, the co-driver of junior rally talent Chris Stilling, on their pair’s journey at the 2021 Netier National Capital Rally.

Chris Stilling is aiming for the Junior Cup as well as 2WD.  And with so many entered in the Juniors, the competition was hot.

In our sights was the fast kid from Victoria in Adrian Stratford, but we knew our little red Corolla was no match for that Ford Fiesta. And we were aware of Ryan Williams’ speed in his new Ford Fiesta R2 and how that would also be hard to match.

Our game plan was to have a steady run as it was a long event. Chris drove at a solid pace and was focused on keeping the car neatly in the middle of the road. Halfway through SS2, we passed Williams and Brad Jones with their car a long way off the road.

After that, every 500m or so, we would see rally cars falling victim to the forest, it was crazy! It was only stage two, but we knew that as hard as it was to hold back on our pace, it was better that than ending our rally short. We were really happy with our times, considering our rally plan. A very quick 10 min service by our crew was awesome, but we really didn’t give them anything to fix, just asked them to rotate our Hoosier tyres.

The three stages in Kowen forest were next. The stages were cresty, tight and twisty at the spectator point and some nasty hidden “catch you out” corners.  I had to be on top of my notes and Chris had to listen carefully, taking no risks.

That strategy paid off once again as there were still many cars flying off the road with their triangles out. Thankfully we returned to service again, and with not too much to ask from out amazing crew.

The repeat loop of the three Kowen forest stages had us wary. We expected the road surface to deteriorate and it sure had. Corners became very unpredictable and we weren’t sure whether the road surface would be solid, bull dust or chopped up with rocks exposed.

We decided there was nothing to be gained by taking risks with that amount of uncertainty so backed off where needed, which meant we lost a little time, but we were still in the rally.

Still we were seeing cars crashed in the forest. Chris did find a little confidence though, and cheekily gave the spectators a chance to see the Corolla really flyover the jump. Saturday night service was again a dream. Our little Corolla was keeping up to task.

Sunday morning we had a bit more of a go, trying to find speed by improving our smoothness through corners, but without being stupid.  The time we lost late on Saturday was being made up.  We had a cracking run in Caves and Cottage 5 Ways.

Next was Tidbinalla, the final stage of any decent length at 19km. Chris drove well, however a small cut of a tight corner awkwardly bouncing the Corolla across the road. All of sudden, we suddenly had to deal with we assumed was a broken driveshaft.

We still had about 15km to go and we needed to rule out a flat so as we drove past yet another car on the side of the road, which happened to be Taylor Gill, we asked them if we had a flat, to which they told us no.

Damn that meant it definitely was a driveshaft.

We weren’t going to stop as we knew we had a service next so we limped through the stage and were overtaken by the other junior in Ryan Poel. We also messaged our crew while in stage to ensure they would have things ready for us at service. RallySafe was great, they even asked us questions while we were driving along to check in.

We finished the stage with the next car of Ryan Williams close behind us, an. On the transport back to service, we found a safe place to pull over. Ryan was fantastic, he pulled over too to see what he could do to help. We ended up using our ratchet strap to loop around the broken driveshaft and carefully headed back to service. Thankfully no late time lost. In service, the crew were ready to swap out the broken driveshaft with a new one, but there was one more glitch. The driveshaft had sheared off with the spline still oddly caught in the differential/gearbox. This meant we couldn’t put a new one in!

We didn’t give up, though. We decided to continue as on a one wheel drive. Our crew cut the broken drive shaft so it would hold the wheel bearing onto the hub and tried to block up the hole to the differential /gearbox as best they could.

Plenty of people were worried we wouldn’t make it and we needed to carry gearbox oil in the car to top it up constantly. But we only had the final two stages to go.

We had for sure lost our second place in the ARC Junior Cup position, but we still had third on line as there was a 26 minute gap between us and fourth place, so it was doable.

The penultimate stage felt horrific, incredible steep hills were horrible on the one wheel drive. We were driving at 15km/hr in some parts, but we still limped through and finished.

Our gearbox was complaining and there was no reverse or second gear. We topped up more oil in transport and were able to regroup and all we had now was the final Power stage, but there was no chance of winning that.

Chris started in third gear, and we had to keep it in third the whole stage. We didn’t want to risk the gearbox further, so we stayed at 70km/hr max. At least this stage was more level so to speak, no super steep up hills. Holy Moly. That little Corolla held it together and we still finished third in the class. Wow. We were just so chuffed.

To our surprise, we finished third in the Shamrock Haulage ARC 2WD Cup, even though we finished on 1wd and got to spray some champagne!

It was such a reward for our team to see us up there. They got us to the finish line. We could not have done it without them

All the junior teams were amazing.  We didn’t really get to meet Adrian Stratford’s team as they were seeded a fair way up, but all the other juniors are developing great friendships and support for each other. Which is exactly how rallying should be.

The next round of the RSEA Safety Motorsport Australia Rally Championship, the Accent Benchtops Rally Queensland, takes place next month in Gympie on 21-23 May.