Bates will campaign the turbocharged Yaris in the final two rounds this year, replacing the S2000 Corolla he has driven to a narrow three-point lead in the driver’s championship.

The new all-wheel-drive Yaris rally car promises to be quicker as it is lighter and more nimble with a lower centre of gravity and substantially higher power and torque outputs.

Bates – the son of four-time ARC title-holder Neal – is confident of steering the new car to victory while acknowledging the challenge of getting up to speed immediately with an all-new machine.

“The new Yaris lived up to expectations by performing flawlessly in our first fully fledged shakedown just a week before its competition debut in Rally SA,” Bates said.

“The shakedown confirmed our decision to opt for the Yaris with its combination of small, light car with turbo performance resulting in brisk acceleration, excellent suspension travel and nimble handling,” he said.

“It was quick and strong, just as you’d expect from the latest in a long line of rally cars built by dad and his team at Neal Bates Motorsport.”

Following this weekend’s Rally SA, the new Yaris rally car will compete on the world stage in November at Rally Australia, which is final round of the Australian and World Rally Championships.

Toyota this year returned to world rallying with the Toyota GAZOO World Rally Team, featuring Yaris WRC cars prepared at a new team base in Finland.

Both AP4 and WRC Yaris cars have 1.6-litre turbocharged engines, but Bates’ car has a 34mm inlet restrictor that limits power compared with the WRC spec car.

Innovations in Bates’ car include de-stroking a 1.8-litre Twin Cam Multi-valve Toyota 2ZZ-GE engine to achieve the desired 1.6-litre capacity. The 2ZZ-GE engine was sold in Australia in naturally aspirated form in Celica and Corolla Sportivo.

The brake system consists of ventilated, slotted discs with AP Racing callipers and a Sadev hydraulic hand brake, to suit the special demands of rallying on gravel.

Bates has impressed in his short rally career, becoming the youngest winning driver in ARC history by taking out Victoria’s Eureka Rally in March.

He and co-driver John McCarthy followed up with a dominant performance in their “home” rally in Canberra, winning seven of the 13 completed stages.

Neal Bates said the time was right to replace the Corolla S2000 that has served the Bates clan for a decade.

“For its time, the Corolla was one of the best S2000 cars in the world,” Bates senior said. “But everything in motor sport moves on and there has been so much progress in the last ten years that we have incorporated into the new Yaris.”

Toyota motorsport: In 2017, Toyota marks the 60th anniversary of its first international motorsport entry (and the first by a Japanese car manufacturer), when it contested the 1957 Round Australia Trial. This is why many people consider Australia to be the birthplace of Toyota motorsport. Today, Toyota contests the FIA-sanctioned World Rally Championship, World Endurance Championship which features the famed 24 Hours of Le Mans, and the gruelling Dakar Rally. Closer to home, the Toyota 86 Racing Series seeks to develop the talent of tomorrow as Australia’s premier grassroots circuit-racing category. Toyota also supports the Neal Bates Motorsport team in the Australian Rally Championship. 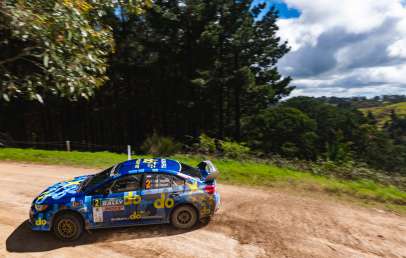